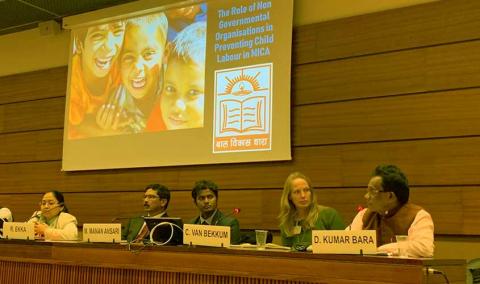 New Delhi: Once a child labourer in Mica Mines, 14-year-old ChampaKumari of Jamdar village in Giridih district of Jharkhand is not just fighting against child labour and child marriage but has become an example for other girls in her village and state after receiving the prestigious Princess Diana Award in July 2019this year. She received the award for her work against child marriage in Mica mine areas.

Champa is among the luckier children who were withdrawn from child labour and got a second chance of life.

In a bid to make other children of the state as independent and confident as Champa, the Jharkhand government now plans to make two districts of the state, Ranchi and Giridih, child friendly.

During a special session organised by Kailash Satyarthi Children’s Foundation (KSCF), an organisation founded by Nobel Peace Laureate Kailash satyarthi, at the 8th UN Forum for  Business and Human Rights at Geneva,  Rajeev Arun Ekka, principal secretary, Department of Labour, Employment and Training, Jharkhand, announced the agreements signed at district level  to work with KSCF in order to make the two districts child friendly and promote and implement jointly programmes for addressing exploitation of children.

KSCF organised a session during the UN Forum on Businesses and Human Rights conference on ‘Building a Child Labour-Free Mica Industry across India: The Role of Governments, Businesses, NGOs and Communities’, in collaboration with the Estee Lauder Companies at Geneva in November 2019.

NagasayeeMalathy, Executive Director, Programmessaid, “The session put forth the findings from multi-stakeholder collaboration over several years to eliminate child labour in Mica mining region of Jharkhand in India and elaborated on the grassroot initiative of Bal MitraGram(Child Friendly Village).”

She added, “The discussion featured based on practical experiences from business and civil society organisations as well as the Jharkhand government, besides measures taken by them to protect children in the state from human rights abuses through the replication of the BMG model.”

An agreement for collaboration was signed between Jharkhand Government’s labour department and KSCF for making Ranchi and Giridih child friendly.

The purpose of the agreement is to take steps towards eradicating child labour from mica mining areas and promoting the Bal Mitra Grams which serves as a coordinating framework for consultation between the district administration of Ranchi and Giridih and the KSCF.

Malathy informed, “The collaboration is to jointly design and implement innovative programmes such as BMG and programmes related to children to ensure the protection of children in mica mining areas. It also calls for promotion of appropriate measures and safeguards to curb the trafficking of children, women from mica mining areas, jointly undertaking mass awareness campaigns on child labour, child marriage, child sexual abuse and child trafficking.”

Since 2005, 126 villages of Jharkhand have been made child labour-free through BMG concept of KSCF. The Child Friendly village model has changed the lives of around 50,000 children in these villages and has successfully proven that access to education and retention of children in schools, also led to access to various government schemes.

The BMG model directly addresses the problems that create and maintain child labour by attacking the root causes to ensure sustainability of the eradication of child labour. BMGs emphasize child participation, community mobilization, the promotion of education, victim’s/survivor’s empowerment, gender equity and awareness on gender issues, the convergence of various government schemes and programmes and ensure sustainability of the initiatives.

Please configure this section in the admin page