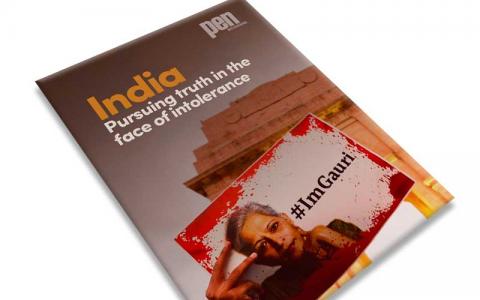 The 15-page report “India: Pursuing truth in the face of intolerance” contends that “future generations will likely look back at BJPs win in 2014 elections” as “the beginning of a drastically different era in independent India”.

Pune: The Global writers’ body PEN International, released its annual “Freedom of Expression Report” at the end of its 84th Congress held in Pune between September 25 and 29.

It released a report “India: Pursuing truth in the face of intolerance” that outlines how dissenting voices, by journalists, writers, academics or students “face intimidation, harassment, prosecution, online abuse, and physical violence.”

The report brings together voices of writers, journalists, lawyers and academics, illustrating the varied ways in which critical voices are targeted and silenced.

It highlights “the use of overbroad laws; directed attacks online and offline; the systematic stifling of academic research and freedom; and the continued marginalisation of and hostility towards women’s voices.”

“Laws that stifle speech; an environment hostile to dissenting views; and emboldened critics online and in the real world have cast a chill over free expression in India. Journalists and writers have been sued, intimidated, threatened, and sometimes murdered. There is little political will to amend the laws that prevent free expression or to enforce laws that protect the writer,” said Salil Tripathi, Writers in Prison Committee Chair.

PEN International said in an official statement that it “calls on the Indian authorities to protect its writers, journalists and all others exercising their right to free expression” and to “bring its legislation in line with its obligations under international law”.

The writer's body has demanded that Sections 153B (assertions prejudicial to national integration), 295A (blasphemy), 499 (criminal defamation), 124A (sedition) and 505 (statements conducing public mischief) of the IPC that restrict the freedom of expression be repealed.

“While this gathering has been about the promotion of peace-building and celebrating the power of the written word, it is also about protecting free expression and remembering those of us who pay the ultimate price for exercising this fundamental right. Today we honour Gauri Lankesh, who was shot to death outside her home a year ago. Even though we welcome the progress that has been in the investigation, we’re still waiting for justice. Unless the cycle of impunity is broken, those who want to use violence to silence will be emboldened to do so,” said PEN International President Jennifer Clement.

Asked about the views and findings of the PEN as far as worsening of situations under the Modi regime is concerned, Clement unequivocally said there has been “a rising tide of violence, impunity, extended pre-trial detentions, impunity and surveillance”.

“We have quite a few recommendations to the Indian government. To ensure the safety of journalists and make sure that there is no impunity against them, to ensure that they are not harmed, as has been seen in several high-profile cases, train the police, launch public information campaign to inform citizens of their legal rights in the face of online harassment and threats,” Clement told IANS over telephone from Pune.

She added that the PEN International felt “very strongly”, especially in a country like India, as “the differences are what unites people and not what divides them”.

“The government should be thinking about the things that bring people together and not tear them apart. I think what PEN is concerned about is that India has always been a country that one could uphold for being tolerant and being democratic. It used to be that India could be held as an example to the rest of the world. It’s very sad to see this turn. What would the future of such a democracy look like,” she asked.

The 15-page report “India: Pursuing truth in the face of intolerance” is highly critical of the Modi government and opens with a poster of the firebrand journalist-activist Gauri Lankesh.

The report contends that “future generations will likely look back at the Bharatiya Janata Party’s (BJP) win in 2014 elections” as “the beginning of a drastically different era in independent India”.

Notably, of the three new Vice Presidents, chosen for their “literary merit”, two are dissenting voices from India: Tamil writer Perumal Murugan, who was himself hounded by right-wing activists, and Nayantara Sahgal, who has been at the forefront of protests by writers and intellectuals against the Modi government.

In August, after several rights activists and lawyers were arrested, PEN Delhi had condemned the Pune police’s actions: “It is a dark day for India when crackdowns and arrests target those who fight for human rights, while murderers such as those who killed journalists, thinkers and writers, Govind Pansare, Narendra Dabholkar, MM Kalburgi and Gauri Lankesh are yet to be convicted.”

With inputs from IANS