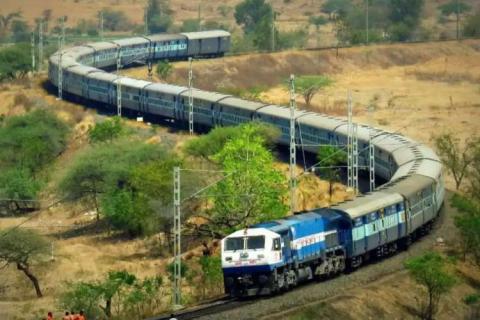 With a recent letter from Cabinet Secretary to Chairman and Chief Executive Officer, Railway Board in the Ministry of Railways asking him to intimate his office the monthly progress of privatization of Indian Railways, the process of its all round privatization has been fast tracked. This follows recommendations of a Panel on Rationalisation of Government Bodies and Proposal for the Ministry of Railways, headed by Principal Economic Advisor Sanjeev Sanyal in the Ministry of Finance. Modes of privatization will be Public-Private-Participation (PPP), Joint Venture (JV) or outright privatization of major activities like train running, asset maintenance, station management, project management, execution, production units, school management, medical services and so on. All relevant domain will reside in the private sector, supported at the lower level by Group B managers and supervisory technical cadres. Privatisation involves major restructuring that could lead to the closure of major establishments, merger of some organisations and private participation in operations of railway schools and railway hospitals.

In this backdrop, Railway Minister’s declaration in the ongoing budget session of Parliament that the Government will not privatize Indian Railways sounds fantastic, surprising and hollow in view of the Cabinet Secretary’s impugned letter. Cabinet Secretary reports directly to the Prime Minister (PM). His words to Secretaries in the Government works as gospel as in the present Union Cabinet, no Minister has authority. Ministers just enjoy power and pelf. Entire governance is driven by the PMO. Ministries/Departments are there just to implement the PMO’s orders. Railway Minster’s assertions, therefore, sounds far fetched and unconvincing. Government is going whole hog in implementing Sanyal panel recommendations on privatisations. Well, in the scheme of the Constitution of India a Minister is in himself/herself constitutes Government of India in respect of areas under his/her charge enjoying unbridled reservoir of power whose decision cannot be changed or modified by even the PM except the Union Council of Minister, a hallmark of cabinet system of democratic governance. But for all practical purposes, no words of individual Minister can be taken for granted in the current one man Union Government.

As a sequel to this, IR will lose its social responsibility. All sops and concessions to the people except in respect of select few cases already have been withdrawn. Concessions to people in different categories are given as a hallmark of responsive political and democratic governance to generate public goodwill and trust that the government is caring. Net result of railways privatisations will increase all round costs of rail services to the nation. Employment has shrunk to about over 800,000 with approximately 300,000 vacancies existing and about matching number of employees working on sheer contract with no job security and other benefits like accommodations, children education allowances, medical facilities, pension benefits etc. taking advantages of massive unemployment, rampant poverty and insecurity of people. All such regressive actions and its ill effect on people are for every one to see. Situation is likely to worsen further if people do not rise against such anti-people move to halt such mischiefs in its track.

Privatisations of remunerative high-density track passenger services are progressing at fast pace. Freight trains on the Dedicated Freight Corridors (DFCs), currently under progress, on Delhi-Kolkata and Delhi-Mumbai and Kolkata-Delhi-Mumbai DFCs, are sought to be privatized. Already, bread and butter yielding container services of high rated commodities by CONCOR, the Container Corporation of India have been privatized. So is the case with the ticketing and tourism arms of IR, IRCTC, the Indian Railways Catering and Touring Corporation. Both have been hived to private players. Privatisations have already taken a toll of Central Organisation for Railway Electrification (CORE), which has been closed. Central Organisation for Modernisation of Workshops (COFMOW) and Indian Railways Organisation for Alternative Fuel (IROAF) have been closed, signaling that Sanyal panel report is being implemented. Information Technology arm of IR, Centre for Railway Information System (CRIS) that develops software capacity like passenger ticketing, freight invoicing, passenger train operations including strategic one, management of train crews, management of fixed/rolling assets, is being disbanded and all such works being transferred to IRCTC, where because of part privatization, national security on train operations for strategic purposes will be endangered.

Going by the plan, RailTel, the largest telecom infrastructure on IR that focuses on modernizing operations and safety systems through optic fibre networks along railway tracks is being merged with IRCTC. RITES (Rail India Technical and Economic Services Ltd) that provide consultancy on transport systems, exports rolling stock, is taking over Kolkata based Braithwaite & Co. Ltd. that produces rolling stock for IR is now sick since 1992. Rail Vikas Nigam Ltd. (RVNL), which implements creation and augmentation of rail infrastructure on the Golden Quadrilateral connecting four metros and major ports, is being merged with IRCON (Indian Railways Construction Company Ltd) ostensibly on the ground that their work profile is almost common. Besides, 94 Railway schools imparting education up to senior secondary standards to the wards of railway employees across the country are being privatized. One of the options under consideration in this context is to hand over these schools to Kendrya Vidyalaya. Final decision is expected to be announced. Added to this, 125 Railway hospitals and 586 health units (wellness centres) are being privatized and opened to general public to enhance health infrastructure with private participation.

Railway factories known as departmental Railway Production Units are sought to be brought under the Central Public Sector Enterprises (CPSEs). When decided, assets, infrastructure and employees of all the eight Railway Production Units would be transferred to the CPSEs, as proposed. Railway Production Units are: Integral Coach Factory (ICF), Chennai, Rail Coach Factory (RCF), Kapurthala, Modern Coach Factory (MCF), Rai Bareilly, Chittaranjan Locomotive Works (CLW), Diesel Locomotive Works (DLW), Varanasi, Diesel Loco Modernisation Works (DLMW), Patiala and two Rail Wheel Units at Yelahanka, Bengaluru and Bela (Bihar) are being transferred to the CPSE. This would enable the government to list it in the capital market for IPO or privatization. Right now, these production units are departmental.

Each of the Central Training Institutes for eight organized Group A services (five from Combined Engineering Services Exam and three from Central Civil Services Exam) is being merged with the National Rail and Transportation Institute of National Importance following merger of eight Group A services into a single service cadre titled Indian Railways Management Service (IRMS) with reduced combined services strength from more than 8,000 to fixed 5,000 cadre strength (reduced by 40 per cent) of IRMS, signaling a leaner managerial cadre to oversee rail services to the nation and growing privatisations of IR and ever curtailing workforce therein!