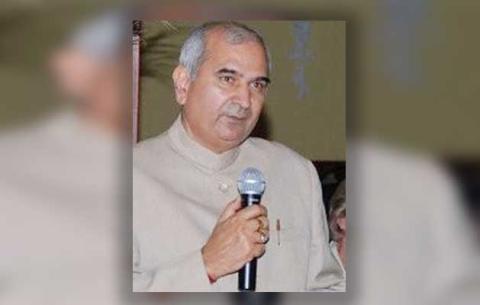 India’s civilisational holy treatise, the Vedas mention Ayurveda as a system of medical knowledge having been transmitted from God to sages and from sages to human physicians. Originated in ancient India, it is a system of holistic and natural alternative medical care that ensures health of the healthy and cure for all types of illnesses to enable the patients to live healthy and long life. Healers in this system of medical care are known as Vaidya(s). One who excels in this alternative system of medicines is the world famous Vaidya Devendra Triguna, a highly gifted health provider with divine capability. He treats the symptoms, focuses on root cause diagnosis of illness by providing a lasting solution for the recovery and health of his patients.

An Ayurvedic physician of unparalleled repute, Devendra Triguna provides quality health care. He is known for his expertise in pulse diagnosis (Nadi Vidya). He diagnoses all types of ailments on the pulse beat of his patients without subjecting them to crass commercial multi-diagnostic tests, which in modern parlance traumatize and fleece the patients. He believes in a holistic approach for any treatment and holds that there is no need for high technology surgeries, if life-style changes, as advised, is incorporated. To him, pulse is a window on people’s health.
Such is the popularity of celebrated Ayurvedic doctor Devendra Triguna, whose five generations have been practising Ayurveda, that prestigious Delhi hospitals, both public and private, refer cases to him. Several doctors from these hospitals visit him for their own treatment. High dignitaries like governors, politicians, bureaucrats and common people throng his clinic at Sarai Kale Khan and Bhogal in the National Capital Territory of Delhi. The unending patients come from across India and abroad including Europe, USA and neighbouring countries. His motto has been to provide his patients a better and healthier long life. Added to this, he works like a missionary and is highly dedicated, in service, to people without commercial considerations. He provides free consultations.
Son of the highly decorated legendary and renowned Raj Vaid, Padma Vibhushan Brihaspati Dev Triguna, Ayurvedic physician Devenda Triguna, is not only a natural inheritor of his father’s professional legacy as a health provider, but he has been excelling right in the foot steps of his illustrious father. I have been watching Dr. Triguna since February 2015 as his patient. During this period, my interaction with a cross section of his patients has revealed an unmatched level of satisfaction in his patients as they feel a great deal of difference in their health and happiness. Ayurvedic physician Triguna has proved beyond doubt the pioneering leadership in quality systems driven medical care through alternative herbal medicines, with no known side effects. A champion of health of people worldwide, Vaid Triguna attacks the very cause of illness to restore health of his patients. He has been promoting Ayurveda with his legendary Raj Vaid father (since deceased) across the world, as a combination of medicines and life-style discipline and equilibrium between the two.

Vaidya Devendra Triguna studied Ayurveda in the famous Ayurvedic & Unani Tibbia College, Delhi for 5 years and obtained degree of Ayurvedacharya-Dhanwantari in the year 1974. Initially, he was sitting for Ayurvedic practice along with his father at Sarai Kale Khan and also established his own clinic at Bhogal in the evening independently. After death of his father in the year 2013 he is treating patients in the morning 9.30 to 2.30 p.m. at Sarai Kale Khan and in evening 6.30 to 9.30 at Bhogal. He is since known widely for his successful treatment of several and all types of illnesses like hyper tension, heart diseases, blood cancer, all other types of cancer, kidney ailments including kidney failure, abdominal diseases, skin diseases, spondylitis, asthma, arthritis, neuro-muscular disorders, diabetes, insomnia et al.

A highly respected physician, Vaidya Triguna is a recipient of several awards including India’s coveted civilian honours, Padma Shree and Padma Bhushan, the fourth and third highest national recognition for his outstanding contributions to Ayurveda. A former honourary physician to the President of India, he is currently president of Association of Manufacturers of Ayurvedic Medicines and the All India Ayurvedic Congress. In addition, he is Vice President of Central Council of Indian Medicines, a Government of India nodal agency, office bearer of the Central Council for Research for Ayurveda in the Union Ministry of Health & Family Welfare, and the Ayurvedic Pharmacopoeia Committee of the Centre. He also presides over the Rashtrya Ayurvedic Vidyapeeth, a national institute of higher Ayurveda learning. He is on the Advisory Committees on Ayurveda of Himachal Pradesh, Sikkim and Uttar Pradesh, besides serving as a member of the Employees State Insurance Corporation, Board of Ayurveda and Tibbia College, also served on the Boards of Punjab National Bank and Oriental Bank of Commerce. He is a visiting faculty of Grukul Kangri University and has been honoured with D.Lit degrees by Lal Bahadur Shastri University and Gujarat Ayurvedic University.

A subject of intensive studies by over 260 Ayurvedic Colleges, 50 Post-Graduate Research Institutes and four Ayurvedic Universities in India, super Ayurvedic physician Devendra Triguna functions as a divine messenger of balmy relief to ailing people. One wishes all health providers across the diverse medical profession in the country were like him to usher India in a better health and happiness quotient of its people!