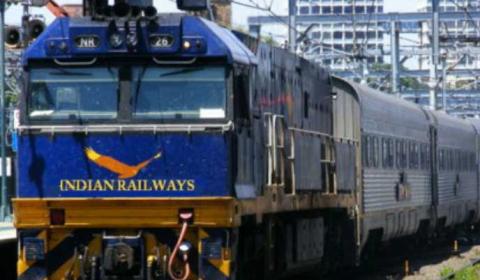 Indian Railways (IR) is downhill the sickness path despite part privatization of earning and profitable blue chip assets like the Container Corporation of India (CONCOR), Indian Railways Catering and Tourism Corporation (IRCTC) and remunerative high yielding operational tracks with further depressing signs of growing debt, designed to make it bankrupt and unviable with privatization (corporatization) of several other assets like unutilized surplus land, stations, railways stadiums, Dedicated Freight Corridors (DFCs) yet to be operational, in pipeline. It also remains under invested under the current NDA union government, dependent as it is on private investments, which are not forthcoming as IR is high capital intensive with long gestation period making it least or nil profitable for the private investors. Current RSS Pariwar union government is all out to sell out all national assets including the IR.

Borrowing arms of IR, the Indian Railways Finance Corporation (IRFC) has raised from domestic capital market and External Commercial Borrowings (ECBs) a cumulative sum of Rs. 5.04 lakh crore till March end 2022. In the current financial year 2022-23 the borrowing target is Rs.60, 500 crore compared to Rs.60, 683.41 crore in 2021-22. Added to this, Rs. 100,000 crore loan from Japan for Ahmedabad-Mumbai-Ahmedabad bullet train, Rs. 150,000 crore from LIC borrowed for upgradation, renewal of rail assets and expansion and several tranches of loans taken from the World Bank, Asian Development, bilateral and multilateral sources make it to over Rs. 10 lakh crore. In addition, there are thousands of vacancies, which are not being filled up.

Merger of Railway Budget with the General Budget in 2017 freed the IR from paying annual dividend on capital at charge to the General Exchequer giving the initial impression that railway finance would improve further. But that has not happened. On the contrary, Operating Ratio (OR) of railways has sunk to the lowest. Working expenditure is now more than the revenue from earnings of passenger and freight traffic as also from sundry sources. This has prompted the IRFC to expand its sources of borrowings for IR from the World Bank, New Development Bank, National Bank for Financing Infrastructure and Development (NBFID) and several other European banks to its list of borrowing sources, thus drowning the IR further under the debt trap from which it would be difficult for the railways to come out.

Even before the pandemic induced crisis, IR was in dire financial straits. Its total capital expenditure (CAPEX) was Rs.148, 065 crore in 2019-20 rising to Rs.161,692 crore Revised Estimates in 2020-21, further to Rs.215,058 crore in financial year 2021-22 Budget Estimate. Investments in IR carry high costs following higher CAPEX share through extra-budgetary resources/market borrowings. IR’s own funds have aggregated to below 3 per cent of the total CAPEX, during the last few years.

Post the pandemic induced lockdown; IR has been maximizing resource utilization and accelerating asset velocity. Yet its performance has gone down. Productivity indices of its high value assets has been declining miserably amidst stagnant traffic throughput resulting in its pricing assets becoming chronic with its multifarious problems like bureaucratic obese structure, public service obligations in democratic frame, warped investment priorities, empire building by departments, capacity crunch on arterial routes, strained terminals, irrational fair and freight structures. It has lost constantly share in country’s freight and passenger traffic with growing capacity crunch. With the growing market dynamics, multimodal whole journey would be a necessity. IR’s passenger services need to be revamped and core freight business strategized further to make it financially viable.

IR’s productivity has sunk to its lowest since 2014-15 because of growing privatization, low morale of work force, increasing contractual employees, privatization of passenger and freight services on remunerative arterial routes, sale of its assets and ever increasing debt trap through market borrowing as well as bilateral and multi-lateral foreign debts, besides the present NDA Union Government’s apathy to make the railways a meaningful national public services.

However, there is still some silver lining in that private players are still wary over long gestation period between investments and its fructification in a high capital intensive railways subject to faster rusting and corrosion and for that matter faster depreciation of its assets. Failure of Sate Governments to concur with the Central Government over unified central command of security on railways involving amendment to the Constitution with policing and law and order being State Subject, raging turf war between Centre-States over policing of railways, fear of people squatting over railway tracks blocking traffic every now and then over various grievances including local ones etc. are some of the major issues inhibiting private sectors in rail operations.

Privatisation of rail operations is still far off. It may be possible only when the present Constitutional democratic governance is abrogated and a formal Hitlerian authoritarianism takes over.! However, other assets, logistics, passenger amenities, etc. can be privatized. There is no obstacle to that. So far, there is no taker.